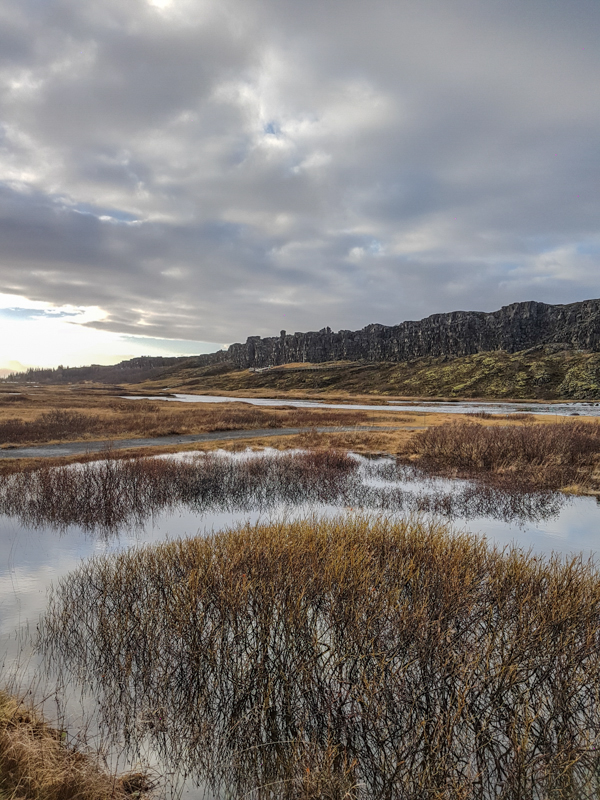 The Best of Iceland in One Day

Icelandic horses came to Iceland with the first settlers from Norway, 1100 years ago, Icelandic law prevents horses from being imported, to prevent the degeneration of the stock. Once an Icelandic horse leaves the country, it can never return to Iceland. The island isolation, helped the horses to preserved a typical walk, and physical characteristics, from an ancient breed of horses that is now extinct outside of Iceland.

Icelandic horses are often considered pony size, but many who ride them say that they have a horse’s feel. And never mention “Pony” in front of an Icelander.

In all the meadows, where we saw them, we just had to call them, and they came to us, which is quite surprising. Only a small part of the horses you meet are dedicated to horse riding, the majority is intended for the food industry.

But remember to be careful, if you stop on the side of the road to pet them. 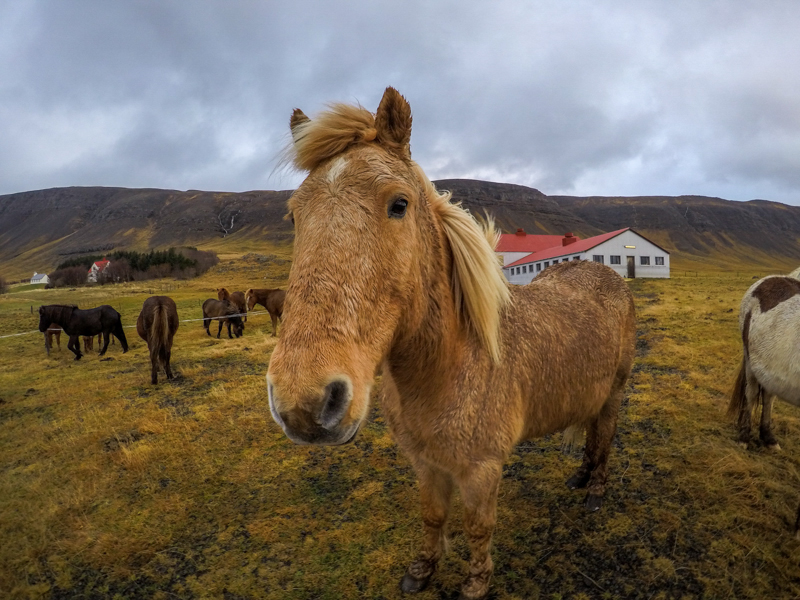 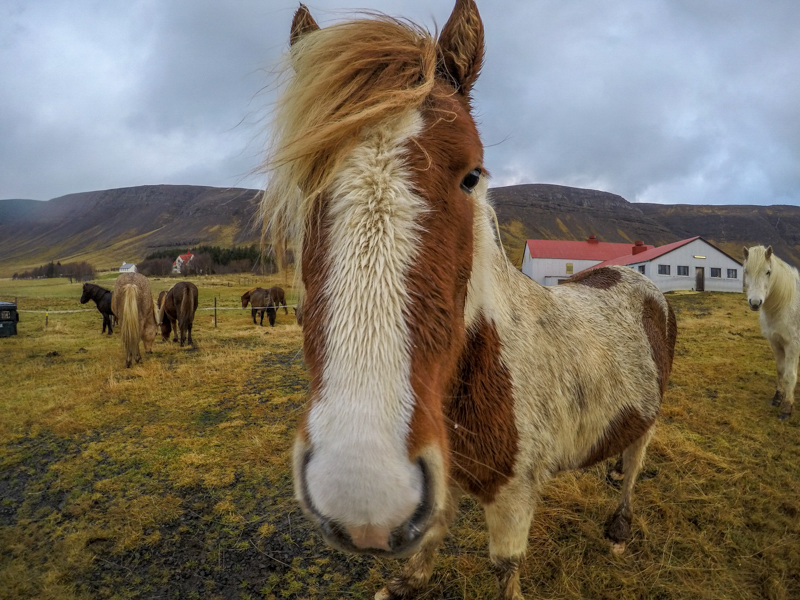 Þingvellir National Park : The first A-lister on Iceland’s Golden Circle day was Þingvellir (pronounced Thingvellir) National Park, it is the cradle of Icelandic culture. Probably the first parliament created in the world. In 930 people came to the Althing for the first time and continued to do so until 1799. They came from the four corners of the country and the position was choosen to be at the crossroads of the communication routes.

The whole area is part of a fissure ribboning through Iceland where you can clearly see the drifting in the tectonic plate boundaries of North America and Eurasia – The Mid-Atlantic Ridge.   The rift widens every year by a few millimetres and the faults in the earth’s crust filled with deep crystal-clear waters are clearly visible.

It was the place where the laws were created and validated. Anyone could join in and speak.

Thingvellir is located just above the dividing axis of the Americo-European tectonic plates, their spacing is on average 5 mm per year (70 meters in the last 10,000 years). The fault that can be seen, was already well created in the 10th century, for a long time.

The largest contemporary event, took place at Thingvellir. In 1944, the Icelandic Republic was proclaimed there. 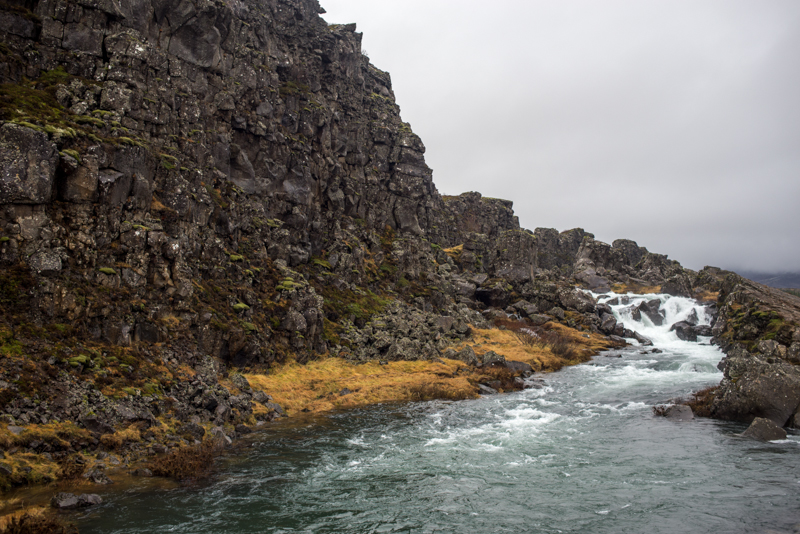 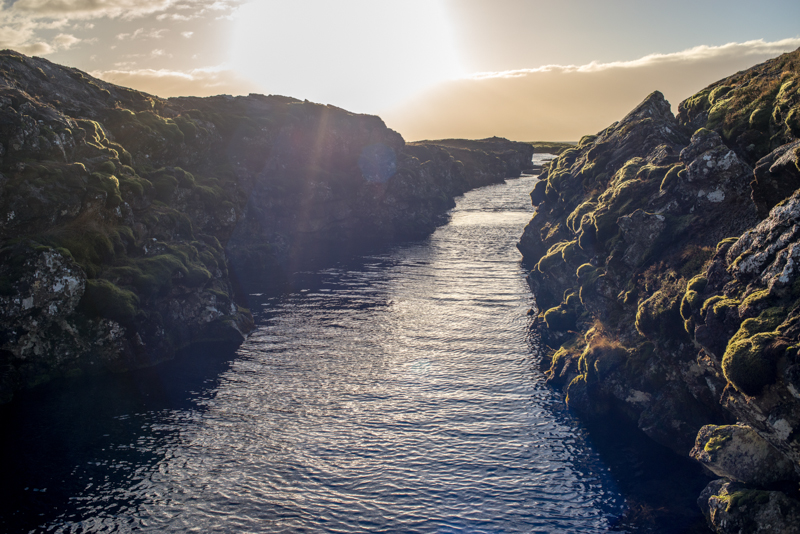 After a short photo stop to finally capture some Icelandic horses selfie, we arrived at Geysir to take some more pictures. Many people waited in front of the original “Geysir“, the same one who gave his name to any similar phenomenon worldwide (now it “only” erupts at least every day and sometimes several times per day). But after 20 minutes, there was still no sign of activity, it has ceased to erupt often after an earthquake shut it down.

This was not Strokkur case (the new “geysir”), set like a clock, reportedly world’s most reliable geyser. In 1963 man intervened and thoroughly cleaned the geyser’s wind. It has been the main performer in the geyser area since that time. Waiting only between 4 and 8 minutes will be need to attend the “eruption” of a regular eggy smelling sulphur blast, more or less 20 meters of height. They are a constant reminder of the activity going on beneath the surface.

This 300-kilometre loop from Reykjavik can be conquered in half a day, including on one of numerous bus tours from the capital, but is best enjoyed with time to linger and also visit other attractions along the way.

The pools of ancient geysir are impressive in clarity, but please do not throw money at it. The Icelanders take seriously the respect of their environment, as innocuous as it may seem, throwing coins in a natural environment , deregulatesall its balance equilibrium. 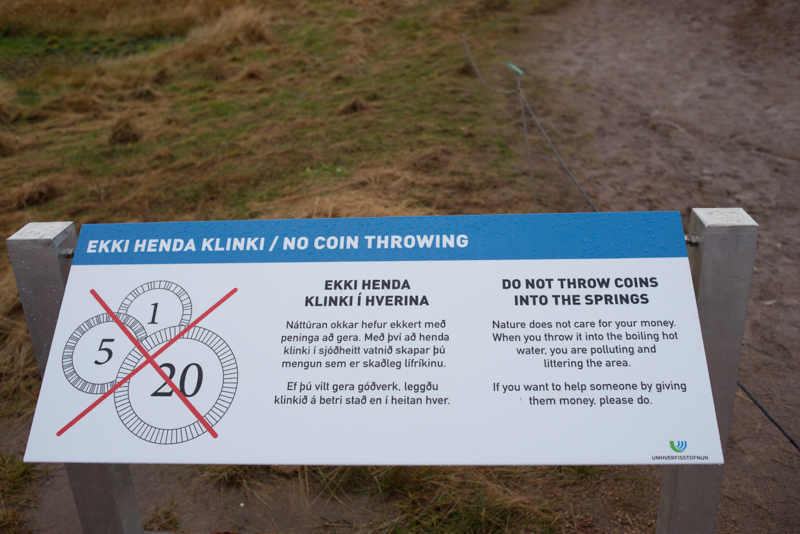 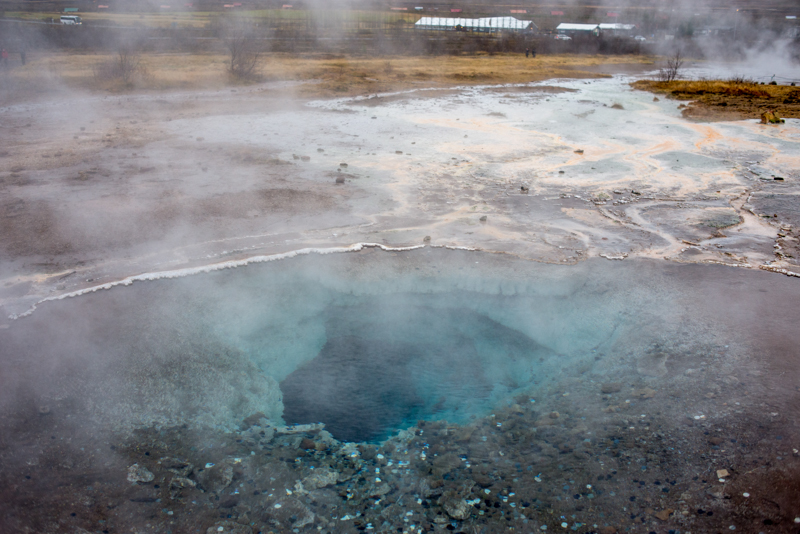 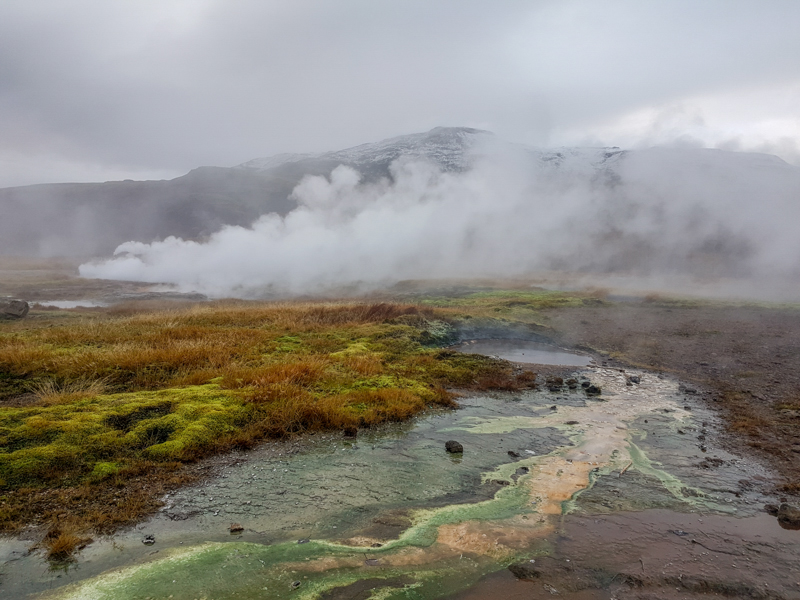 The third A-lister on Iceland’s Golden Circle tour was the majestic Gullfoss or The Golden Falls.  We heard Gullfoss before we saw it and as we carefully made our way down the icy path the thundering noise of the River Hvita filled my head and a chill spray misted the air.  Gullfoss is magnificent and despite the freezing weather I stood mesmerised.

The powerful river tipped over the first step and roared towards me thundering and foaming, hints of turquoise shining beneath the surface, before pitching over the crevice and exploding into the canyon below leaving me feeling completely alive and invigorated.  And very, very tiny.

The mighty Hvítá river abruptly disappears into a ravine at a spectacular waterfall called Gullfoss, the next major highlight on Iceland’s Golden Circle. This wide & fast moving river turns a corner and falls 100 feet into a crevice in the earth, producing thick mist & frequent rainbows.

After descending a long staircase from the parking lot, a concrete pathway allows visitors to walk along the edge and look down into the roaring cascade of water. The area around the falls gets pretty windy, so a waterproof jacket (and maybe even pants) is recommended if you plan to get close. The dramatic scenery at Gullfoss makes it one of Iceland’s most popular attractions.

Gullfoss waterfall is located off the main road, so you have to backtrack a bit to continue on the Golden Circle route. There is a road that continues past, but it’s one of Icealand’s notorious F-roads that requires four-wheel drive. 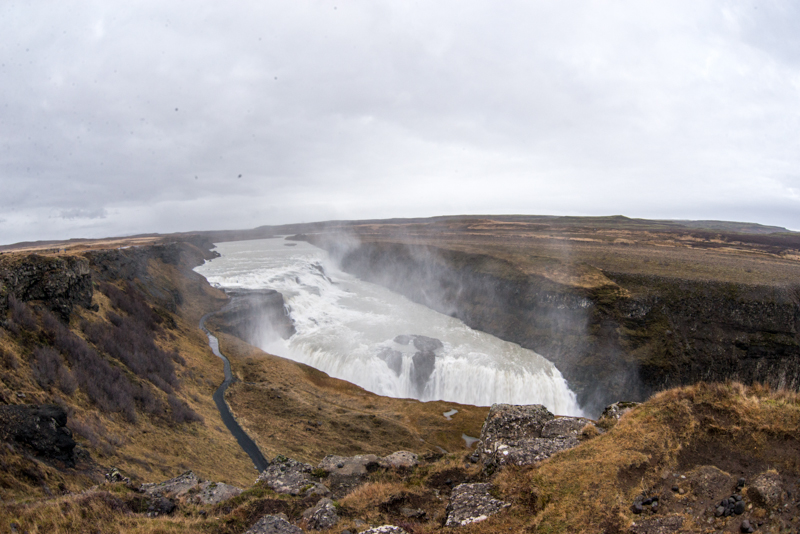 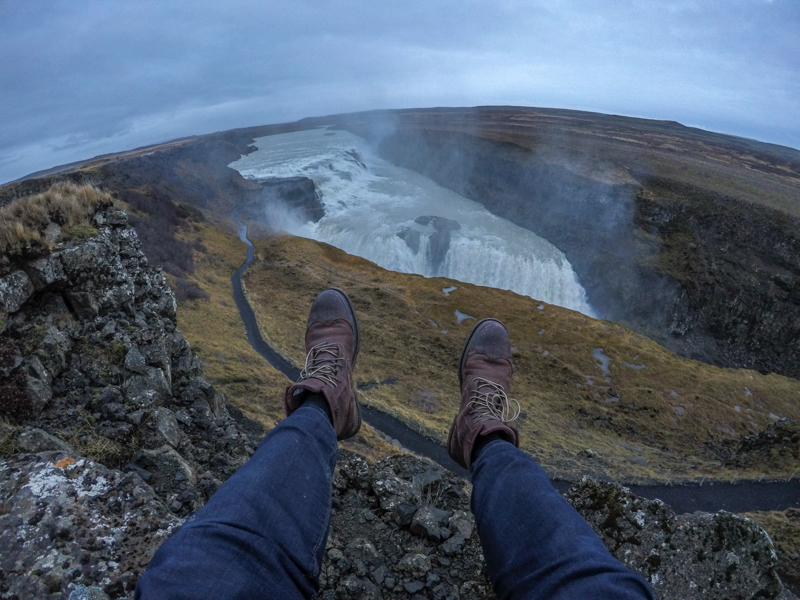 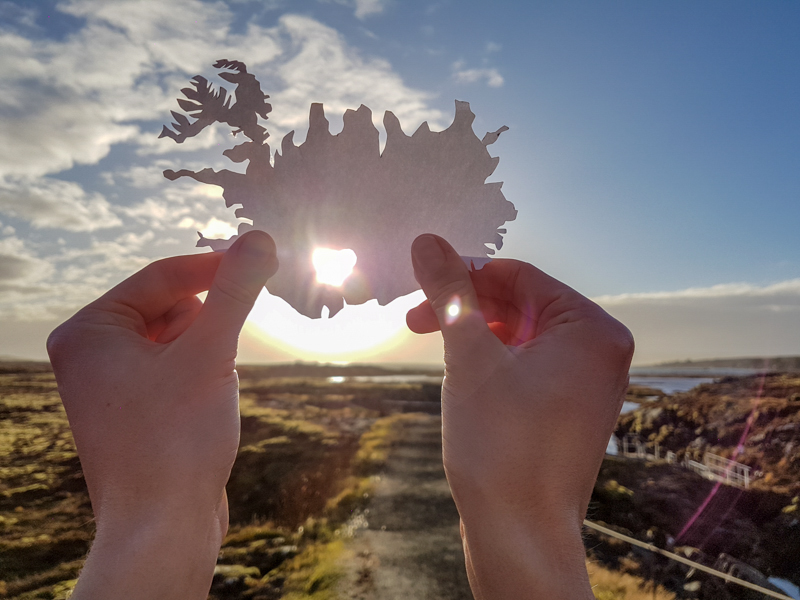 Kerið Crater Lake : It was meant to be our final stop on the Golden Circle. But the road was closed that day, due to weather condition.

To note, there is an entrance fee now (400 Kr), thanks to people visiting Iceland, unable to respect the trail. The price of the ticket is used to preserve nature (marking – path – fences – limitations). This is the first site of the Golden Circle you are ask to pay for. And unfortunately, it probably wont be the last. 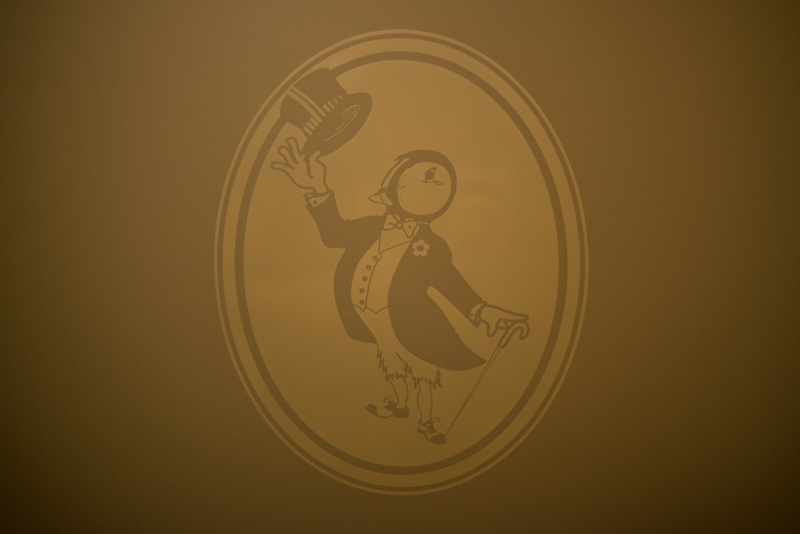 Thingvellir : No fees are mandatory, you will just have to pay for the parking (500 ISK / private car / 1 day).